For a fire to begin there must be three elements, a fuel (the material that will combust), presence of ignition / heat source and oxygen. These three are known as the fire triangle, removing one or more of these elements will prevent / put out a fire.

All fuels vary in the quantity of oxygen required for them to burn , for example flammable liquids cease to burn when oxygen content reaches down to around 15% , generally though all fires need some quantity of oxygen in the right proportions otherwise they just will not continue to burn.

In the same way gases will ignite given the correct gas/air ratio’s this is known as flammability range with an upper and lower limit. The flammability limit is crucial and is often referred to as the hidden factor when fires are concerned.

The flammability limits for LPG are roughly: lower 2%   and upper around 9% gas to an air mixture.

In normal circumstances then, a fire cannot start if one of the components of the fire triangle is removed, for example: if there is a gas leak, then removing any kind of ignition would deprive the triangle of its component part. Hence no fire. 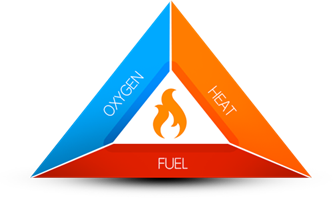 Dry powder is the preferred type of fire extinguisher for flammable gas fires. Small particles of powder, usually sodium bicarbonate, smother the fire preventing oxygen supply.  CO2 could be used in a confined space, as it would flood the area with an inert atmosphere, but unlikely to be effective in open air.

**Remember!!   Extinguishers are for emergency use only.

ALWAYS CALL THE FIRE BRIGADE AND DON’T TACKLE A FIRE UNLESS SAFE TO DO SO.

Fight the fire by removing the pin or tag from the handle, keeping it upright or placed on the ground, and aim the nozzle or horn at the base of the flames, and squeeze the trigger until the fire is out.

Actions in case of leak with fire;

Actions in case of leak without any fire.    Assess then decide.

Identify and if possible isolate the leaking cylinder, and again if possible, stop  the leak at source.

In the event you cannot stop the leak, if you can move the cylinder, to an isolated area clear from buildings and people and as far away from drains, low areas or any sources of ignition.

When removing the cylinder take special care to keep the point of the leak uppermost.

LPG Vapour is non – toxic, which means the gas itself will not kill you, but in a confined space, it could push oxygen out and suffocate you.

It is therefore still advisable to move to an open area and upwind of any leakage.

LPG will cause severe cold burns to the skin, and will badly damage your eyes in the event of accidental liquid spillage, accidental gas release, in certain instances caused by poor handling of cylinders when unloading and loading causing damage to valves or cylinders

It can also happen if you are requested by a customer to connect cylinders to regulators . (Check with your company for local policy or instruction on this action.)

First Aid treatment MUST be carried out immediately by gently placing the affected area under cool, running water or immersion in cool water. You should keep it there for a minimum of 15 minutes.